Let me introduce you to Oliver, better yet, he has his own blog that he personally updates -http://www.oliversmiracle.com/. It was so beautiful, on Tuesday I received a text around 3pm that said Oliver would need a 2nd surgery, and the doctor said he would probably be bound to a wheelchair and for us to keep praying for him. At 5pm, I received a 2nd text message that said "Keep the prayers coming, Oliver just moved his legs!" God is so Good!

Oliver's been anxious to come in the world to play. His mom and I went on a retreat earlier this year, and Oliver was inside her belly praising God so much, she had to sit as close to the bathroom as possible. 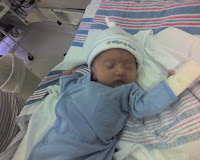 He doesn't like getting his diaper changed. Could he have a little privacy!
Posted by LOVIN' LIFE at 7:19 PM